As 2016 draws to a close, revellers in Canada are celebrating a milestone birthday while bidding a weary adieu to a year filled with political surprises, prolonged conflicts and deaths of legendary celebrities.

Here’s how people are ushering in the new year in Canada and around the world:

In Ottawa, two massive fireworks displays are planned for Parliament Hill to kick off a year-long 150th birthday bash across Canada. More than $210 million has been allocated for the 150th anniversary projects and events.

Environment Canada has issued a special weather statement for the capital region as a winter weather system known as an Alberta clipper moved into the area Saturday. 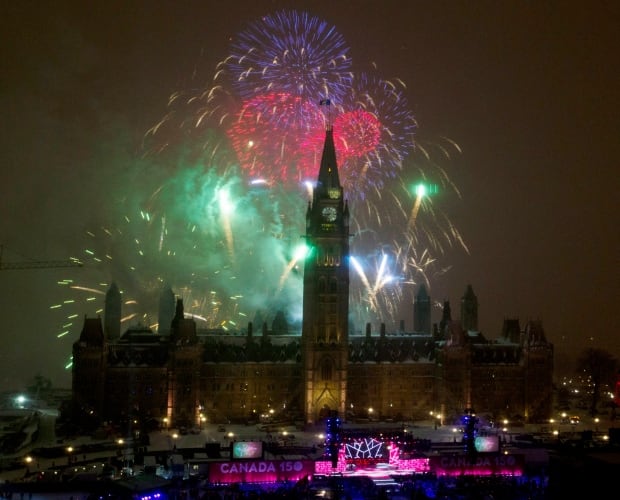 It is expected to bring about 10 to 15 centimetres of snow, which will taper off before Sunday morning.

The Governor General of Canada released a message from Queen Elizabeth on Saturday.

“I am delighted to offer all Canadians my best wishes and congratulations on the 150th anniversary of Confederation,” said the statement from the Queen. “Countries throughout the Commonwealth and, indeed, around the world, rejoice with you as you embark on this special year.

“Throughout the years, particularly since your Centennial year, I have watched Canada develop into a remarkable nation. You have earned a reputation as a welcoming, respectful and compassionate country.”

New Year’s Eve events are being held in 19 cities across the country, including St. John’s, which will be the first to hit the midnight milestone.

Commissioner James O’Neill says everyone should feel safe, especially in Times Square, where as many as a million revelers are gathering to watch the crystal ball drop and ring in 2017. 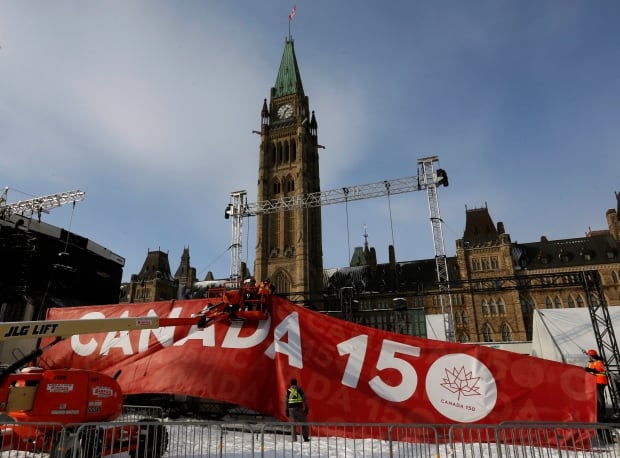 Workers setup a large banner as preparations are made to celebrate Canada’s 150th birthday and New Years Eve celebrations to ring in 2017 on Parliament Hill, in Ottawa on Friday, December 30, 2016. (Fred Chartrand/The Canadian Press)

Police say there were no specific, credible terror threats against the city. But police say they’ve prepared — including lining the Manhattan streets near the celebration with sanitation trucks filled with sand to prevent any attempts to drive into crowds.

It will be impossible to drive into the crowd because of a new security measure. Dozens of garbage trucks filled with sand will be blocking vehicle access to Times Square. 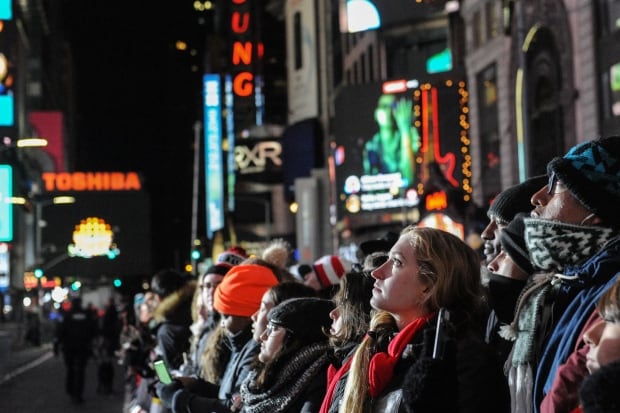 Revellers are being checked by security officials twice, once when they enter the square and once when they go into viewing pens that stretch from 42nd Street to West 59th Street. No large bags or umbrellas are allowed.

This year, United Nations Secretary-General Ban Ki-moon has the honor of pushing the Waterford crystal button that begins a 60-second countdown to 2017.

Happy New Year to all, including to my many enemies and those who have fought me and lost so badly they just don’t know what to do. Love!

It’s estimated that 300,000 visitors have descended on Las Vegas for an extravagant New Year’s Eve celebration.

Nightclubs are pulling out all the stops with performances from DJ Calvin Harris, rappers T-Pain and Kendrick Lamar and artists Drake and Bruno Mars. The city’s celebrity chefs have crafted elaborate prix fixe menus complete with caviar and champagne toasts.

Federal officials have ranked the celebration just below the Super Bowl and on par with the festivities in Times Square. FBI and Secret Service agents will work alongside local police departments that are putting all hands on deck for the big night. 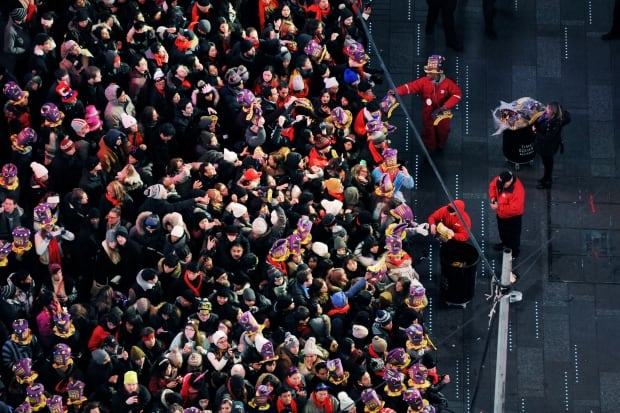 People hand out hats to revellers on the streets during New Year’s Eve festivities inside Times Square in New York. Revellers are being checked by security officials twice, once when they enter the square and once when they go into viewing pens (Mark Kauzlarich/Reuters)

New Year’s celebrations turned deadly when an armed assailant opened fire at a nightclub in Istanbul, killing dozens of people.

Istanbul’s governor says at least 35 people were killed and 40 others were wounded.

Security measures had been heightened in major Turkish cities, with police barring traffic leading up to key squares in Istanbul and the capital, Ankara. In Istanbul, 17,000 police officers were on duty, some camouflaged as Santa Claus or street vendors.

Tourists and French revelers swarmed along Paris’ illuminated Champs Elysees Avenue on a frosty night, admiring the laser display from the Arc de Triomphe and lines of trees sparkling with lights.

“It’s so magical to be here in Paris, on what people say is the world’s most beautiful avenue,” said Maureen O’Reilly, a visitor from Belfast, Northern Ireland. “At times like this, I do think about all those terrible things in Aleppo and how lucky we are here in Europe despite everything.”

Some people were happy to say goodbye to 2016.

“It’s been such a horrible year, with all these [celebrity] deaths, Syria, Brexit and Trump. I say: good riddance,” said Karine Dublot, from Lyon. 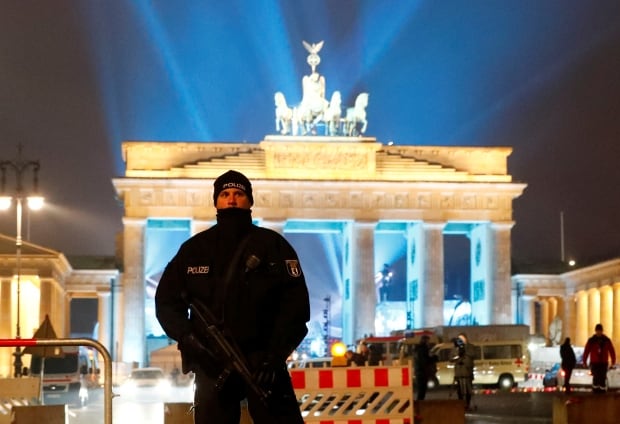 A German police officer guards the venue at the Brandenburg Gate, during the upcoming New Year’s Eve celebrations in Berlin, Germany. (Fabrizio Bensch/Reuters)

Tens of thousands of people gathered in Helsinki for a concert and a huge fireworks display to celebrate the beginning of festivities marking its independence.

Throughout 2017 there will be hundreds of events in the Nordic nation of 5.5 million, from films, dance parties and environment-related events to concerts and activities linked to its renowned sauna tradition.

In Helsinki, Finland, New Year’s Eve festivities kicked off celebrations for 100 years of independence for the Nordic nation. (Jussi Nukari/Reuters)

After a year that saw the deaths of a seemingly endless parade of entertainers, Sydney honoured some of the most beloved. The city’s famed fireworks display over the harbour paid homage to Prince and David Bowie, and was set to a music medley inspired by the late singers. 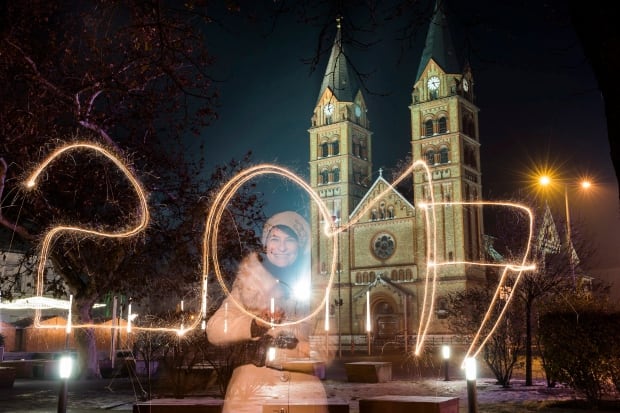 “We are hoping to make it rain purple this year for the first time, not only off the barges, but also off the Sydney Harbour Bridge,” fireworks director Fortunato Forti said ahead of the celebrations, referencing Prince’s hit Purple Rain. 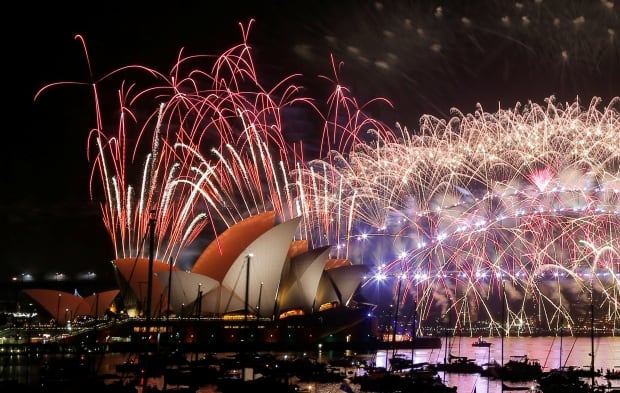 Fireworks explode over the Sydney Opera House and Harbour Bridge as Australia ushers in the new year. (Jason Reed/Reuters)

The seven tonnes of fireworks launched from barges on the harbor also included a “Willy Wonka moment” in tribute to the late actor Gene Wilder’s most famous role, fireworks co-producer Catherine Flanagan said. And there was a nod to the Bowie classic Space Oddity, with Saturn, moon and star-shaped fireworks. Bowie lived in Sydney for about 10 years during the 1980s and ’90s.

“This year, sadly, we saw the loss of many music and entertainment legends around the world,” Flanagan said. “So celebrating their music as part of Sydney New Year’s Eve fireworks displays is an opportunity to reflect on the year that has been and what the future may hold.”

Around 1.5 million revellers gathered in the harbour to join in the festivities. An extra 2,000 police were on duty and buses were used to block off certain pedestrian areas following the deadly truck-driving attacks in Berlin and Nice, France.

Officials urged residents to carry on celebrating as normal, despite the threats of extremist attacks across the globe and in Australia. On Friday, a man was arrested after police say he posted threats on social media related to Sydney’s New Year’s Eve celebrations. New South Wales police said he was acting in isolation and had no known links to extremist groups. 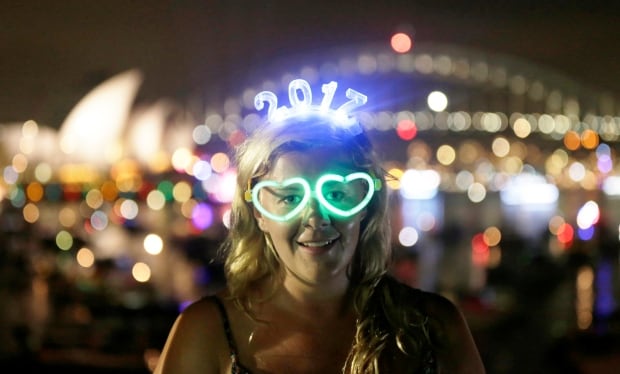 Charlotte Kent from Huddersfield in England wears glowing glasses and a headset for 2017 before watching the New Year’s Eve fireworks in Sydney, Australia, December 31, 2016. (Jason Reed/Reuters)

In Dubai, hundreds of thousands of people are expected to watch as fireworks shoot from the sides of the world’s tallest building, the 828-metre Burj Khalifa. The show also will be streamed live online.

But authorities hope they won’t see a repeat of last year’s excitement, when police say faulty wiring sparked a fire several hours before midnight at The Address Downtown, a 63-story skyscraper nearby. The high-rise tower still remains under repair. 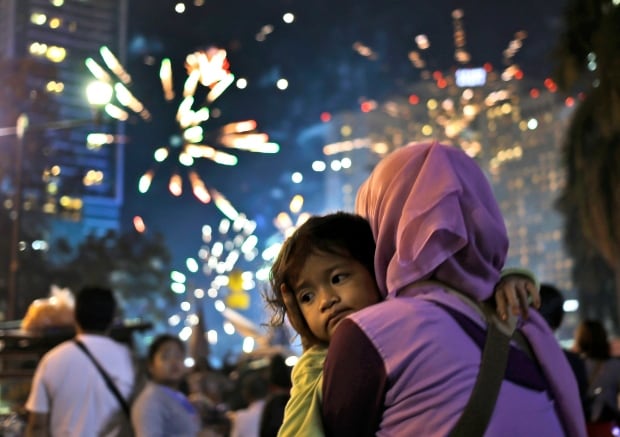 The Bund waterfront in Shanghai would not have any celebrations, authorities announced this week, while the sale, use and transportation of fireworks in central Shanghai would be prohibited altogether. Large buildings that often display light shows also stayed dark.

More than 30 people died two years ago in a deadly stampede on Shanghai’s waterfront, where 300,000 people had gathered to watch a planned light show.

Beijing police also said countdowns, lightshows, lotteries and other organized activities would not be held in popular shopping districts such as Sanlitun and Guomao.

Kim Il-sung Square in the North Korean capital, Pyongyang, was the scene of a fireworks display to ring in the new year. 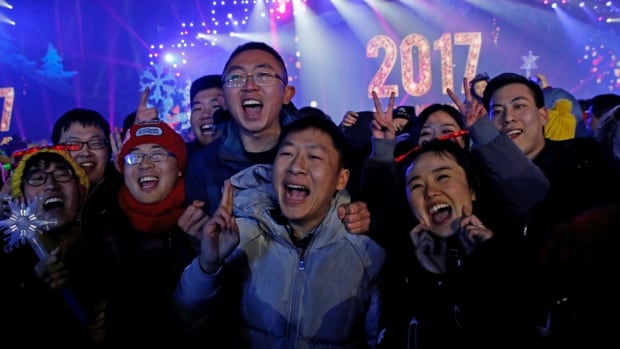 To the south, hundreds of thousands of South Koreans ushered in the new year with a massive protest demanding the resignation of disgraced President Park Geun-hye. It was the 10th straight weekend of protests that led to Park’s impeachment on Dec. 9 over a corruption scandal.

The evening rally overlapped with Seoul’s traditional bell-tolling ceremony at the Bosinkgak pavilion at midnight.

“So many unbelievable things happened in 2016. It didn’t feel real; if felt like a movie,” protester Lee Huymi said about the bizarre scandal that brought Park down. “So I hope 2017 brings a movie-like ending to the mess. Everything getting solved, quickly and all at once, leaving us all happy.”

For most people in India, New Year’s Eve is a time for family. In New Delhi and many other cities, newspapers are full of big advertisements for lavish parties at upscale hotels and restaurants. The big draws at the hotel parties were song and dance performances from Bollywood and television stars. 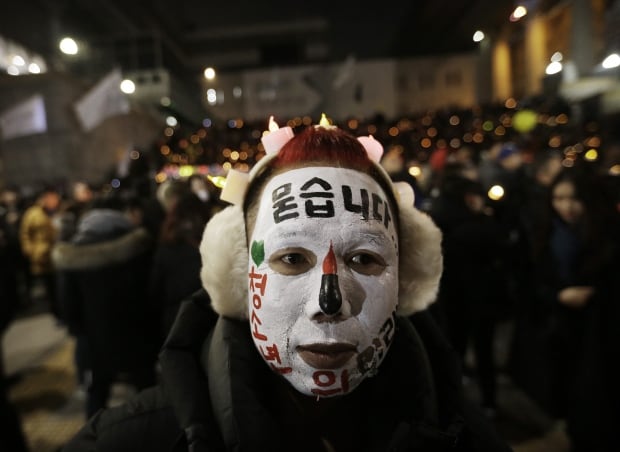 Even on New Year’s Eve, large crowds of South Koreans gathered to join another rally in Seoul demanding the ouster of impeached President Park Geun-hye, who’s determined to restore her powers through a court trial. The letters read ‘Asking.’ (Ahn Young-joon/Associated Press)

Police with breath analyzers checked for drunk driving, and security was tightened in malls and restaurants.

The western city of Mumbai hosted big street parties with thousands of people at the iconic Gateway of India, a colonial-era structure on the waterfront overlooking the Arabian Sea. There was music, as well as dancing and the occasional fireworks.