Preparations are well underway on Parliament Hill for the official New Year’s kick-off to Canada’s 150th anniversary, including an increase in special security precautions around the nation’s capital.

“Sadly, we’ve seen some of the activities that take place, whether in Berlin or Paris, and you want to make sure that Canadians, when they come to their nation’s capital, feel very safe,” said Ottawa mayor Jim Watson ahead of Saturday’s event, which will see thousands gathered on the front lawn of Parliament for fireworks and a concert.

“We feel very confident that we’ve done everything that we can to make sure [that happens],” Watson added. “We’ve budgeted for that [increase], we’re working cooperatively with the RCMP and the Ottawa police to ensure that we take care of all the possible breaches of security.”

“The government of Canada … has robust measures in place to address [threats],” said Dan Brien in a statement. “We ask Canadians to remain vigilant and to report any suspicious activity.”

But although visitors to the nation’s capital can expect to “see a greater police presence,” Mayor Watson said the city won’t be turning “into some kind of prison camp where you can’t go here, can’t go there.”

“Parliament Hill is open to all Canadians and everyone from around the world, and that’s part of what makes us special as Canadians,” he said.

Ottawa is just one location of several across the country to host New Year’s Eve events celebrating the150th anniversary of Canada’s confederation. 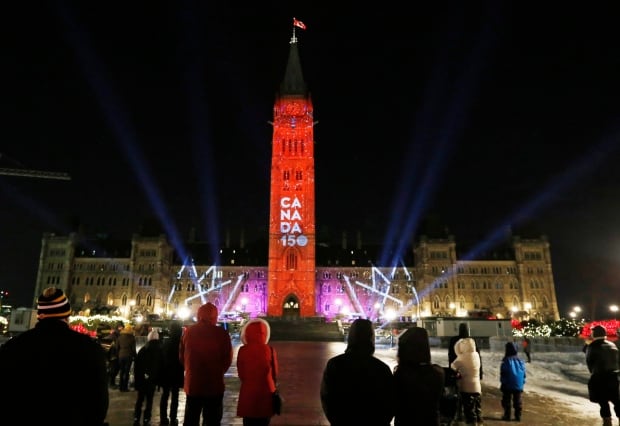 $2.5 million is set aside for the New Year’s Eve festivities in Ottawa, with an additional $2.5 million earmarked for events in 18 other urban centres around the country.

The money comes out of the overall budget for the year’s celebration, set by the previous Conservative government at $510 million.

Katherine Cyr, a spokesperson for Canadian Heritage, said the celebration in Ottawa will be a “once-in-a-lifetime opportunity.”

A fireworks display is scheduled to go off at 8:17 p.m. ET — or 2017 in military time — and will last 21 minutes. It will be launched from three different points on Parliament Hill. A second fireworks display will begin at midnight.

Cyr pointed out that, in comparison, Canada Day fireworks are only launched from one point and last about 15 minutes.

“We are really putting on a unique event that we’ve never had before,” she said. “There’s no other place to be in Canada’s capital region on December 31.”