The head of North Dakota’s emergency management services says the state is prepared to respond to Dakota Access pipeline protesters who may need help during a winter storm or some other crisis. But some protesters on their way to the site are rejecting those calls, saying it’s “just a ploy” to get them out.

Speaking with CBC News near Standing Rock, Sam Deering and Sean Kristopher Tremblay of the group U.S. Vets for Standing Rock said the pledge by officials to help protesters leave the site on the basis of safety is disingenuous and proof that the movement is gaining momentum.

The two veterans said they were headed to Standing Rock to help the “protectors” at the protest site.

“I think it’s just them getting uncomfortable and seeing that the momentum for the protectors is gaining, while their’s is lagging,” he added. “So I think it’s just a ploy to get people out of there — for their own sake, not ours.”

State Homeland Security Director Greg Wilz said it would be a “huge challenge,” especially during a mass evacuation, but his office has winter shelter plans in place and various agencies are ready to respond. 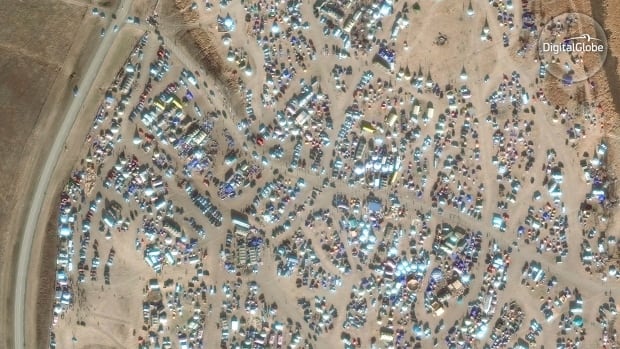 An overhead view of the large encampment on the North Dakota grasslands taken on Nov. 25. (DigitalGlobe via AP)

“The bottom line here is, if we are in a situation of life and limb, we are going to be humane in anything and everything we do,” Wilz said. “We aren’t going to let somebody out there freeze. So if they start evacuating en masse looking for shelter — which I highly suspect will happen — we would take care of that.”

Tremblay thinks the issue of safety is hypocritical, citing violence inflicted upon protestors.

“Safety for the protestors is pretty convenient after you’ve already thrown concussion grenades and fire hoses and billy club people, shot them with rubber bullets,” he told CBC News.

“Now all of a sudden we’re concerned about safety.”

The government has ordered hundreds of protesters to leave the Oceti Sakowin, or Seven Council Fires camp, on federal land in southern North Dakota by Monday, although demonstrators say they’re prepared to stay until changes are made to the route of the four-state, $3.8-billlion US pipeline. The Standing Rock Sioux tribe and others say the pipeline north of the reservation could pollute drinking water and threatens sacred sites.

Veterans standing up for Standing Rock7:37

The North Dakota Department of Transportation and Morton County Highway Department will be key players in any evacuation plans, Wilz said, noting that those agencies worked to keep roads clear around the protest site during a recent storm that dumped more than a foot of snow.

U.S. Attorney General Loretta Lynch said in a statement Friday that the Department of Justice has offered community policing resources to local law enforcement as “winter begins to take hold.”

“Our first concern is the safety of everyone in the area — law enforcement officers, residents and protesters alike,” Lynch said. 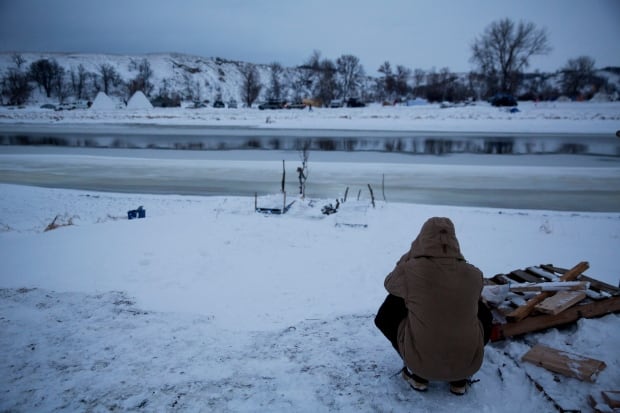 A man sits by the Cannon Ball River at the Oceti Sakowin camp where thousands have gathered to protest the Dakota Access oil pipeline near Cannon Ball, N.D., on Wednesday. (David Goldman/Associated Press)

“While I appreciate the Attorney General taking the time to reach out to me, neither assistance for law enforcement nor a timeline for resolution was offered,” Kirchmeier said in a statement. “I hope the dialogue continues, but it’s time for more actions from the federal government, not more words.”

The North Dakota National Guard is prepared to help with any emergencies, said Jeff Zent, spokesman for Gov. Jack Dalrymple. The Republican governor issued a “mandatory evacuation” Monday for the main encampment, though he said no one would be forcibly removed. 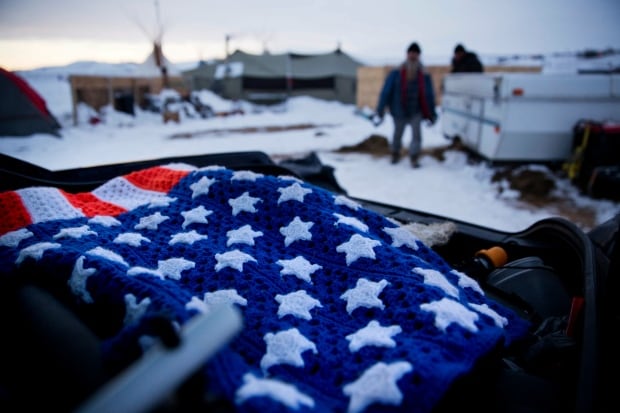 An American flag quilt lies in the back of a veteran’s car at the Oceti Sakowin camp on Friday. (David Goldman/Associated Press)

“All law enforcement personnel who report for duty to the Morton County Sheriff’s Department are now from North Dakota agencies and they are more than prepared for our North Dakota winters,” Keller said.

Wilz said his office has received no response from emergency management officials at Standing Rock about whether they have any emergency plans or whether they need support from the state.