Another charged $54 for a purchase made at the liquor store.

More than a dozen members of the Senate expensed meals adding up to thousands of dollars.

And the charges all appear to fall well within the Senate’s rules.

The spending details were published today in the Red Chamber’s latest quarterly financial report, which covers expenditures from July 1 to Sept. 30.

The document offers a closer look at how senators spend taxpayer dollars, as part of the Senate’s effort to become more transparent.

But one financial watchdog warns this isn’t going to help the institution’s reputation, which was badly damaged during the 2013 expense scandal.

“Taxpayers should be livid,” said Aaron Wudrick of the Canadian Taxpayers Federation.

“Many Canadians are struggling just to pay their bills — to see their tax dollars go towards expensive artwork rentals, or so that senators can wine and dine, is a slap in the face.”

The new disclosure process breaks down hospitality expense claims. Each charge is listed individually, including details such as the purpose, location, and even the number of guests who were present for the cost in question.

The claim includes a $395 bill from Parliament Hill Food Services, which was for a “community event” with 60 guests. 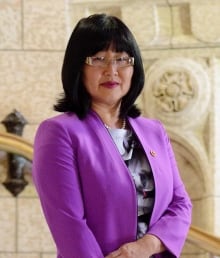 Conservative Senator Yonah Martin spent the most on hospitality charges, claiming more than $1,500 between July and September (Sean Kilpatrick/Canadian Press)

Conservative Senator Dennis Patterson has the second largest hospitality total at more than $1,300.

He spent nearly $450 on House of Commons Food Services, for a business meeting with about 50 people. Patterson’s charges also include smaller claims for purchases at Waters Edge Seafood and Steakhouse, Costco, and Sobeys.

Conservative whip Don Plett charged taxpayers for a purchase at the LCBO. According to the document, the $54 purchase was for a reception.

Senators are allowed to charge taxpayers for alcohol “only when the purchase is in the context of a specific parliamentary function and is of reasonable quantity.”

Plett justified his LCBO charge, saying in an email it was for “a reception for approximately 25 representatives of the Canadian Institute of Plumbing and Heating on Parliament Hill.”

In total, 36 senators claimed more than $10,000 in hospitality expenses.

Details about the kinds of contract work senators are paying for are listed as well, revealing that some members of the Red Chamber appear to be art lovers.

The document says Independent Senator Andre Pratte spent more than $5,600 on the rental of artwork through the Canada Council Art Bank. He paid the same organization $565 for artwork installation. 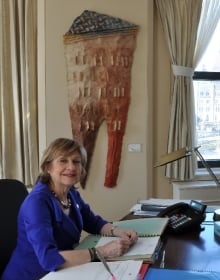 Senator Diane Bellemare in her Parliament Hill office with an unknown artwork hanging on the wall behind her. (Senate of Canada)

But in an email to CBC News, Pratte said taxpayers only paid $2,828, because he “found the total rental cost too high” and paid $3,360 himself.

Diane Bellemare, an Independent, also billed taxpayers for artwork installation, at a cost of $465.

But Bellemare’s biggest contract fee was for website design. She paid Tonik Web Studio nearly $10,000 for work done between Aug. 10 and Sept. 26.

The report shows that Senator Mike Duffy is continuing to charge taxpayers for his Ottawa living expenses.

The senator who represents Prince Edward Island, but has lived in the capital for decades, claimed $1,719.32 for housing related expenses.

This latest document only includes claims from this specific time period. Earlier this year, Duffy charged taxpayers more than $1,600 in living expenses, which means he’s claimed over $3,400 so far this year.

A spokesperson from Duffy’s office said the senator has nothing more to add on the subject.

Duffy was charged with 31 counts of fraud and breach of trust related in part to his housing expenses, but was found not guilty on all criminal charges in April. 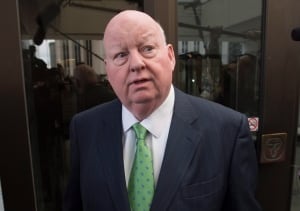 Senator Mike Duffy has claimed $3,400 in expenses so far this year. (Canadian Press)

Senators who live more than 100 kilometres outside of the National Capital Region are allowed to be reimbursed for some housing and food costs while in Ottawa on government business.

Today’s release did not offer any specifics about what senators were claiming for within their housing or office expenses.

“Living and office expenses are not as discretionary as travel and hospitality expenses,” explained Jacqui Delaney, a spokeswoman for the Senate.

“There are caps in place for these as well as the overall cap of $24,000 annually. For security reasons, the expenses related to this category are presented in a consolidated total per quarter,” Delaney said.

A statement from senators Leo Housakos and Jane Cordy, chair and deputy chair of the standing committee on internal economy and administration added that a detailed breakdown “is certainly something we can look at building into this model going forward.”

“These costs weren’t broken down as they are not discretionary,” the statement added.