Prime Minister Justin Trudeau and his cabinet colleagues signed off on two major pipelines today, projects that will pump nearly a million more barrels of oil a day from Alberta’s oilsands to global markets, if they are constructed.

The prime minister said production from Alberta’s oilsands is increasing, and current pipeline infrastructure will soon be at capacity.

“The decision we took today is the one that is in the best interests of Canada,” Trudeau said in announcing his government’s support for the two major projects. “It is a major win for Canadian workers, for Canadian families and the Canadian economy, now and into the future.” 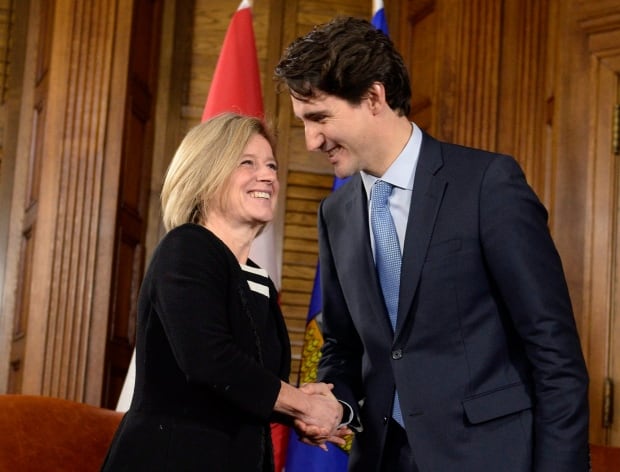 Trudeau said that if these projects aren’t built, diluted bitumen would be forced into more rail tanker cars for transport.

“That is less economic, and more dangerous for communities, and is higher in terms of greenhouse gas emissions than modern pipelines would be.”

The government has been laying the groundwork for approving a major pipeline, courting green-conscious voters with plans to impose a national price on carbon, phase out coal-powered plants by 2030 and overhaul the National Energy Board, the country’s regulator.

Today, Trudeau also announced that the government would ban crude oil tankers along B.C.’s North Coast, promising legislation in the new year to implement a moratorium.

The controversial Trans Mountain expansion project will nearly triple the capacity of an existing pipeline to 890,000 barrels a day.

This $6.8-billion, 1,150-kilometre twinned pipeline will move a mix of oil products from Edmonton to a terminal in Burnaby, B.C., near Vancouver, where it will be exported to markets in Asia. Some of the product is also destined for Chevron’s Vancouver-area refinery. 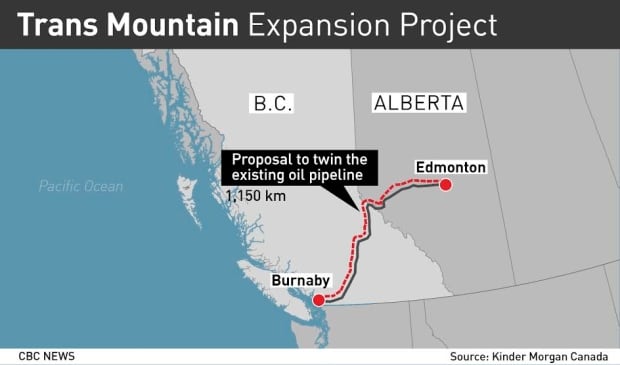 Kinder Morgan’s $6.8-billion, 1,150-kilometre Trans Mountain pipeline will move a mix of oil products from Edmonton to a terminal in Burnaby, B.C., near Vancouver, where it will be exported to markets in Asia.

If constructed, the expansion will lead to a marked increase in the number of tankers travelling through the area — from approximately five to 34 a month — prompting concerns diluted bitumen could be released into an ecologically sensitive area.

Trudeau said the government expects Kinder Morgan to “meet and exceed” the 157 conditions the NEB imposed on the project in April, including spill-mitigation plans. He also pointed to the a $1.5-billion ocean protection plan he announced earlier this month to improve responses to tanker and fuel spills in the Pacific, Arctic and Atlantic oceans.

“If I thought this project was unsafe for the B.C. coast, I would reject it. This is a decision based on rigorous debate on science and evidence. We have not been, and will not be swayed by political arguments, be they local, regional or national,” the prime minister told reporters.

The Canadian Environmental Assessment Agency estimates that the new capacity will result in roughly 13.5 to 17 megatonnes of additional GHG emissions each year.

When fully operational, the pipeline will produce 20 to 26 megatonnes of emissions, the report concludes, although, it also suggests those numbers could be lower if oil prices hover below $60 a barrel, as growth in oilsands production could be curtailed.

“The approvals raise grave doubts how these and additional pipelines, including Keystone XL and Energy East, can fit with Canada’s commitment to the Paris climate agreement,” Patrick DeRochie, the director of Environmental Defence, said Tuesday. “Much bigger cuts in other emission sources must be made to compensate for more oil-based emissions.”

Activists have been lining up to oppose the project, with one B.C. First Nation near the project’s route warning its construction could threaten the community’s very “survival,” and it has not ruled out protests and court action.

Trudeau said he doesn’t expect all Canadians to agree with the decision, and indeed environmentalists lined up shortly after the announcement to denounce the approvals.

Green Party Leader Elizabeth May said she would be “willing to go to jail” to stop Trans Mountain’s construction.

“Apparently Justin Trudeau’s sunny ways mean dark days ahead for climate action and Indigenous reconciliation in Canada. With this announcement, Prime Minister Trudeau has broken his climate commitments, broken his commitments to Indigenous rights, and has declared war on B.C.,” Mike Hudema, a campaigner for Greenpeace, added in a statement.

Trudeau and Ambrose on pipelines1:30

Community opposition has “never been stronger,” Jessica Clogg, senior counsel at West Coast Environmental Law, said in a statement to CBC News. “As we’ve seen with Northern Gateway, that’s what will prevent this pipeline from ever being built.”

There have already been 11 judicial reviews launched over the NEB review, and more court challenges are expected in the coming days.

Despite the opposition, Kinder Morgan forecasts the expansion will create 15,000 jobs a year during construction, and a further 37,000 direct and indirect jobs for every year of operation. It also estimates expanded operations will deliver an additional $46.7 billion in government revenues for all levels of government in the first 20 years. The bulk of that money, $19.4 billion, would flow to Alberta.

Construction of the expansion is slated to begin next September, with a tentative start date of December 2019.

In a largely expected move, cabinet killed the Enbridge-backed Northern Gateway, a proposed 1,177-kilometre pipeline that would have carried oil from Bruderheim, Alta., to an export terminal in Kitimat, B.C.

“It has become clear that this project is not in the best interest of the local affected communities, including Indigenous Peoples,” Trudeau said, describing the local area as the “jewel” of B.C. 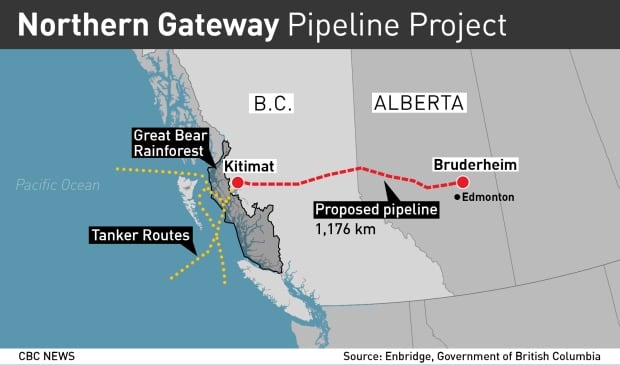 The Enbridge-backed 1,177-kilometre Northern Gateway pipeline would have run from a terminal in Bruderheim, north of Edmonton, to Kitimat, B.C. The federal cabinet killed the project Tuesday. (CBC)

The Federal Court had previously overturned the Harper government’s approval of the $7.9-billion project, as it found Ottawa had not adequately consulted First Nations along the project’s route. Trudeau opted Tuesday not to pursue further consultations.

Interim Conservative Leader Rona Ambrose said she was disappointed to see the government take the project off the table and “kill 4,000 jobs,” suggesting the terminal could have been moved farther north toward Prince Rupert.

“Today, what we saw was one project be rejected, and another project, sadly, be approved but with very little chance of being built,” she said.

“Approval [of Trans Mountain] is just the beginning, but now he needs to use his political capital to see this project get built, and I don’t think he has enough of it.”

Although Enbridge’s Northern Gateway is effectively dead, Line 3, the largest pipeline project in the company’s history, will now move ahead after Tuesday’s decision.

It has attracted considerably less attention, with fewer activists setting their sights on stopping the 1,659-kilometre project that will carry oil from a terminal near Hardisty, Alta., through northern Minnesota to Superior, Wis.

The NEB signed off on a new Line 3 in April, but with 89 conditions for the segment that runs from eastern Alberta to Gretna, Man., near the Canada-U.S. border. 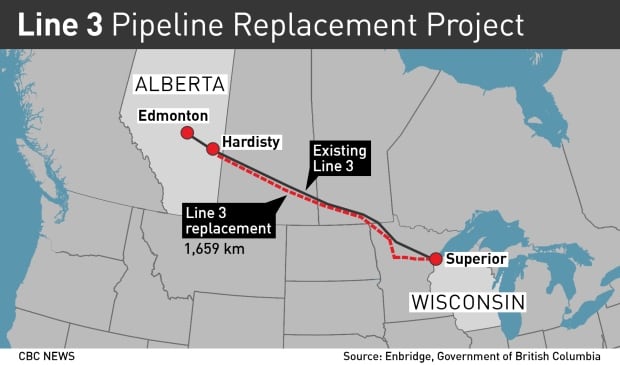 Line 3 is the largest pipeline project in Enbridge’s history. The 1,659-kilometre project would carry oil from a terminal near Hardisty, Alta., through northern Minnesota to Superior, Wis. (CBC)

The $7.5-billion Line 3 project would nearly double the existing pipeline’s volume to 760,000 barrels a day. It would funnel oil into Enbridge’s crown jewel, the mainline system that collectively carries three million barrels a day into the U.S.

The existing line, constructed in the 1960s, has been a source of spills in the past, and the company has voluntarily dialled back capacity to address mounting maintenance issues while it pushes ahead with a replacement.

“We’re pleased by the federal government’s decision to approve the Line 3 replacement program, an essential maintenance project that will ensure the safe and reliable delivery of Canada’s energy resources to market,” Enbridge said in a statement. “We have strong support for the project from our communities along the route, including Indigenous communities.” 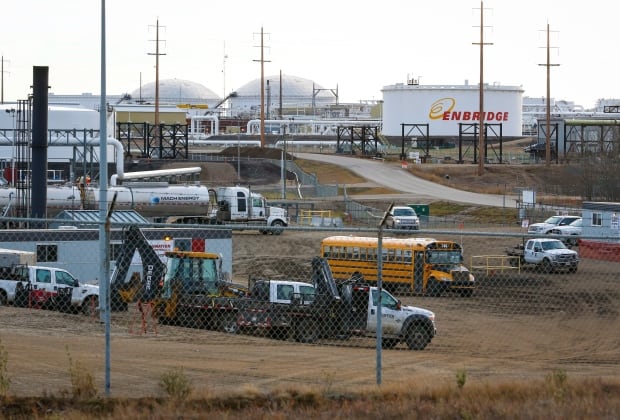 Enbridge hopes to replace the entire span of the aging Line 3 pipeline, which pumps oil from a terminal near Hardisty, Alta., pictured above, to Superior, Wis. (Jeff McIntosh/Canadian Press)